Dave and I veterans of evacuation, it seems. As we were packing up our suitcases for with several sets of clothes, our electronics and all those irreplaceable photographs, artwork, and my recipe box, we were recalling the five hurricanes we’ve evacuated for. Now, we can add evacuating for two wildfires. Our adventure started on a lazy Saturday. Dave was keeping a mindful watch on a smoke plume off to the North. By late in the afternoon, he was concerned enough to force me out of my comfortable chair to pack up all our essentials. The major problem was that I had just taken a new pain medicine for an excruciating back pain. I had no relief from the back pain and the side effects were making me lethargic. I walked gingerly to the bedroom, taking a handful of work clothes still on their hangers and laying them in the suitcase. No decision process – no sorting, just getting something in the suitcase.

We gathered up the dogs and left just as many other neighbors were leaving the subdivision. The smoke plumes were quite close at this time. We parked at a safe distance just outside our subdivision to watch all the activity which included neighbors walking their horses out, people taking pictures of the fire crossing Old Hempstead Highway, and emergency vehicles roaring by. I finally realized that I had my Canon Rebel in the car and continued to take pictures with it rather than my phone. It was amazing how high the flames and smoke were and how quickly it moved across the road headed straight for our homes!

Eventually, we made our way to our friend’s home,Kathy & Bob, who made the unfortunate mistake of calling us as we stood gaping at the flames. We spent two nights and two days on our regular schedule of getting up early, heading off to work, getting some supper and heading back to bed. All the while, we are checking up on the wildfire status using internet news sites and (of all places) Facebook. The worst thing an evacuee can do is follow the news reports on the local TV sites. Not only are they grossly inaccurate, they are also depressing! This was a lesson I should have remembered after Katrina.

We were allowed back into the subdivision on Thursday. Friday afternoon, Dave had just returned with the dogs but I was still at school when the Sheriff came speeding over the hill towards our street. Two officers peeled off one direction in their patrol cars, one headed our direction. Dave hadn’t even taken the leashes off the dogs when the Sheriff yelled over the fence, “Get out now, we are not coming back to warn you again.” There was no time to pack anything! Dave loaded the dogs back into the car. He frantically texted me about the activity and the DC10 flying over dropping red flame retardant.

This evacuation found me with little more than what I was wearing, only two of my electronics (luckily, I had the recharging units) and my school bag. We stayed three more nights in a hotel near another set of friends who were gracious enough to keep our dogs again. After breakfast on Saturday, we made a trip to the store for toothbrushes, and clothes. We spent hours checking the wildfire status using the hotel’s internet and our Ipads. The maps we were seeing had the fire sending its tentacles back into our subdivision but we had no way of knowing exactly where.

We were allowed back into our home after five days of evacuation all together. The electricity had been off for at least three days but clean up was so much easier than when our refrigerator had sat for three weeks without electricity after Hurricane Katrina. There were burned fields just outside of our subdivision and trails of graded fire lines within our subdivision. A few days later, we drove around our surrounding neighborhoods. This is when we realized just how close our home was to danger and how impressive our firefighters worked to save the homes in harm’s way. We stared at the white picket fences that were melted to the ground and the reddish tint on the road from the flame retardant.

The contrast between green and charred tree trunks and bushes greets me everyday as I pull into my subdivision but I am still very thankful. Our emergency personnel and fire fighters did ONE VERY IMPRESSIVE job protecting our homes! 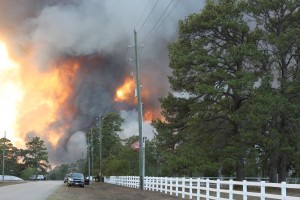